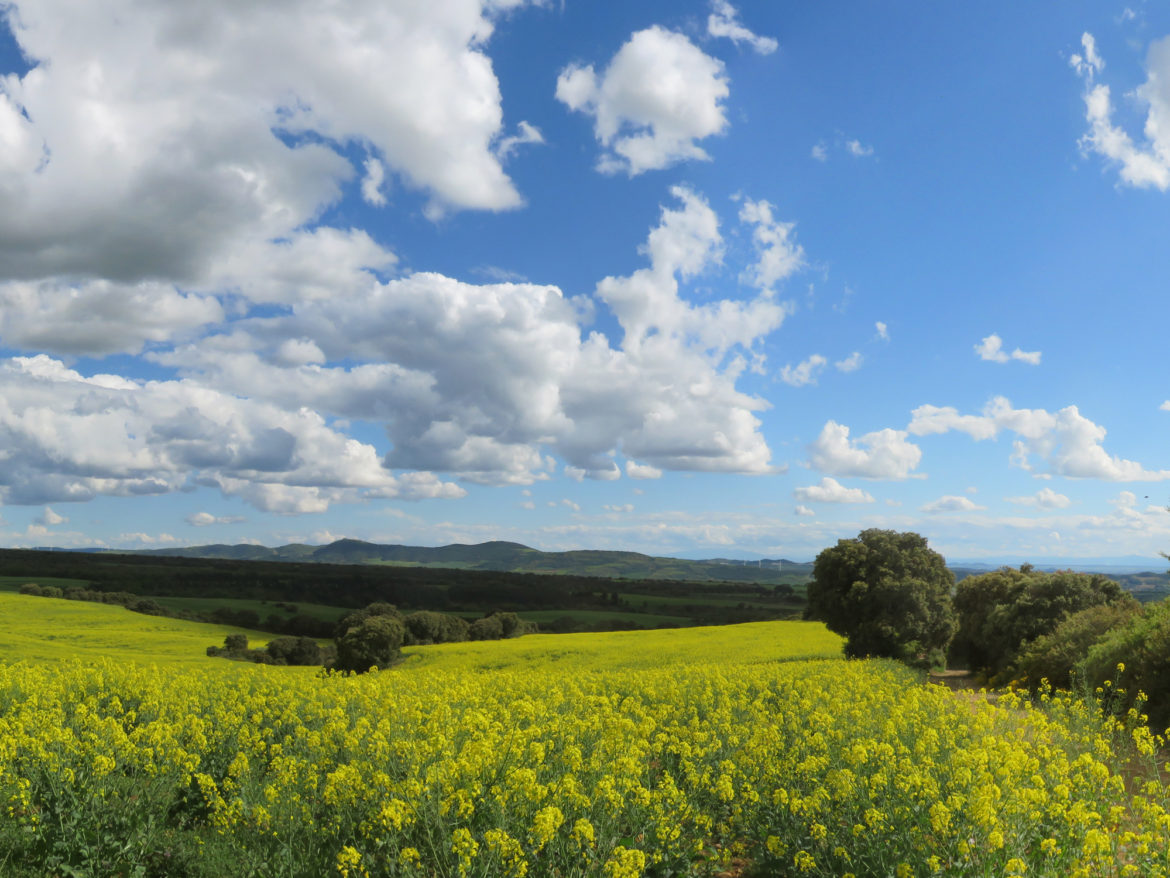 Leaving the Camino del Norte was neither right for me nor wrong. In the end, I would have learned something about myself either way. Each pilgrim has their own journey – that “thing” they need to learn in order to understand something bigger about themselves. No journey will be perfect, but often we embark on it hoping that it will be. And yes, I hoped walking the Camino del Norte would have been just as perfect as my first Camino, challenges and all.

Challenges are bound to arise whether physical, mental or emotional – maybe even all three at once. They can also be a catalyst for change if we don’t fight them. For example, my shin splint that threatened my first journey to Santiago in 2013 forced me to slow down. That’s when I had my inner journey. My body slowed down, then my mind slowed down and poof – blinders off! My focus on the destination faded away and I began to pay attention to everything around me. I walked with the present version of me.

Looking too hard for something is also a challenge. Again, it’s like putting blinders on – the peripheral disappears. The things I was looking for, but couldn’t see, were there, after all they were there in 2013. The problem was that I expected them to be there. The beauty of the first journey, is that I didn’t know what to expect. It was my state of mind, that blank slate of not knowing anything, that allowed the magic, the spiritual experiences, the coincidences and the synchronicity to flow.

Expecting something to be a certain way only brings disappointment and yearning to find the antidote for that. This was my struggle.

As soon as I got off the bus in Pamplona, I hauled my pack out of the storage compartment and began walking. 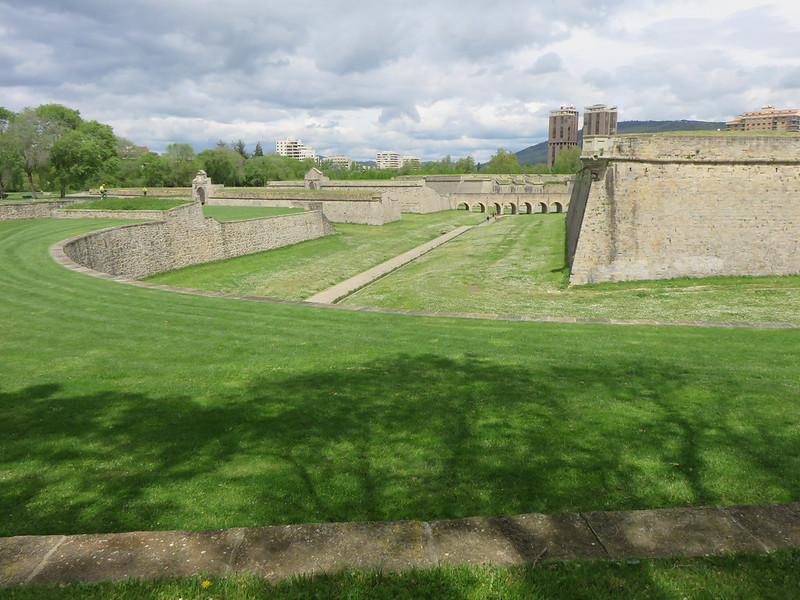 I knew I had made a mistake pretty much right away. Memories of 2013 came rushing back.

Of course the Camino Frances looked different in spring as opposed to fall, but it felt different too. I was different. I tried to recall the landscape in autumn. It was harvest time then and the September sun was hot. The landscape, instead of being covered with thick lush grass dotted with red poppies and yellow mustard, had been rototilled.

There was no denying the beauty of the land at this time of the year, but emotion still stirred in my heart. 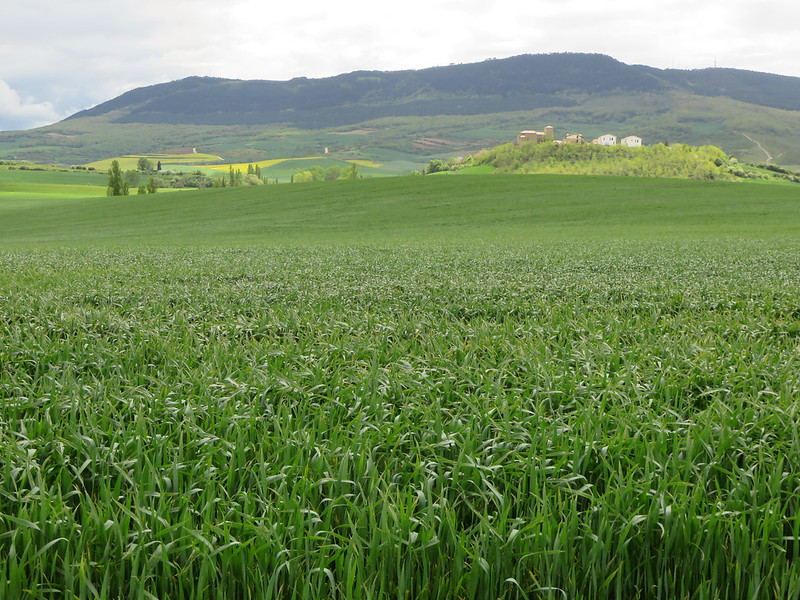 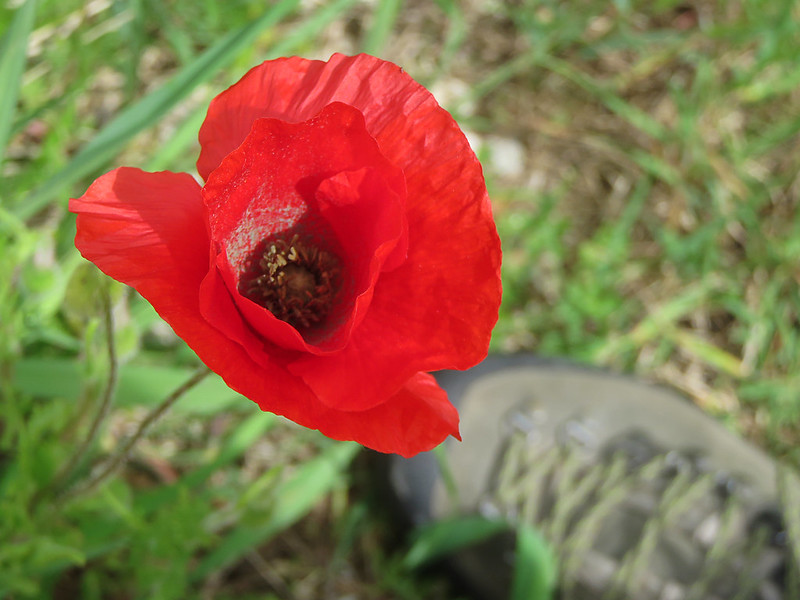 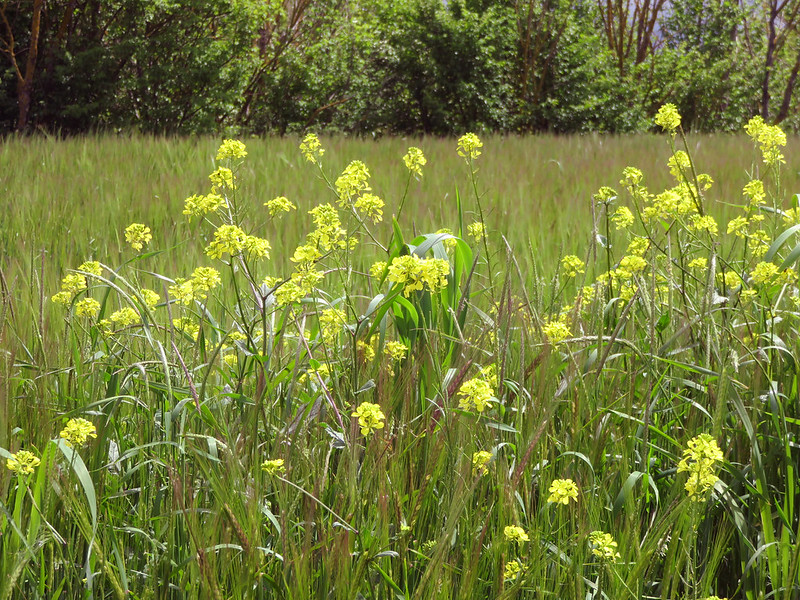 The trees to the right of the path was where my old Camino buddy, Andrew from Germany, and I shared fruit and a chocolate mint Cliff bar. It was just the beginning of a special Camino connection. 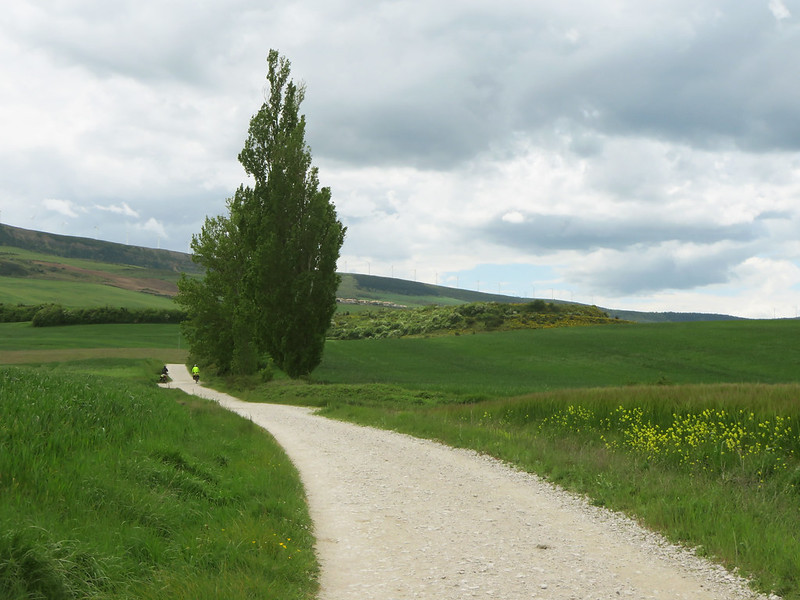 It was now only a memory. 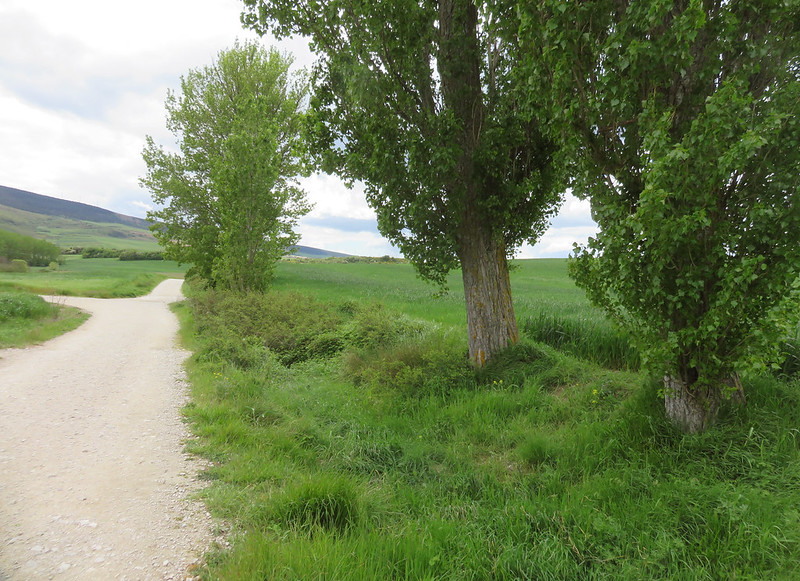 My thoughts, as I walked, were consumed by what used to be and how different the Camino looked and felt now. The landscape seemed hardly recognizable. As beautiful as it was, something about that bothered me. I felt sad. 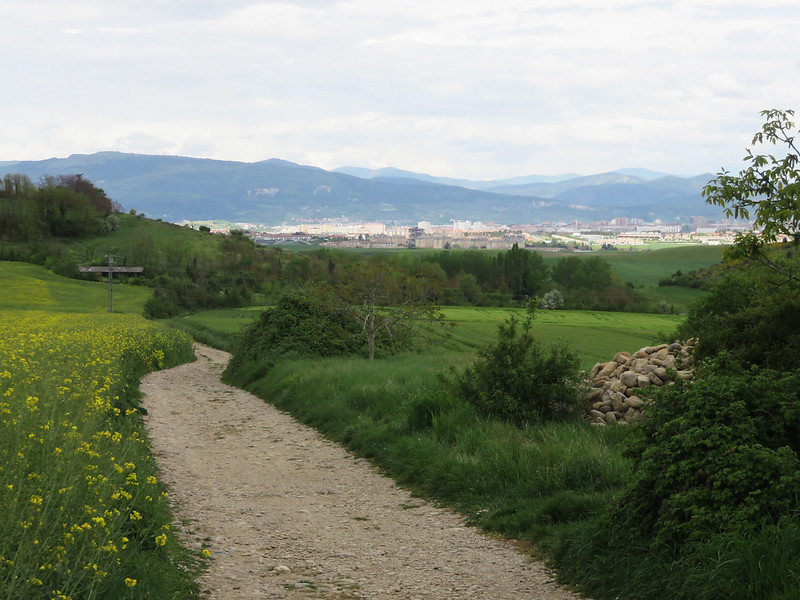 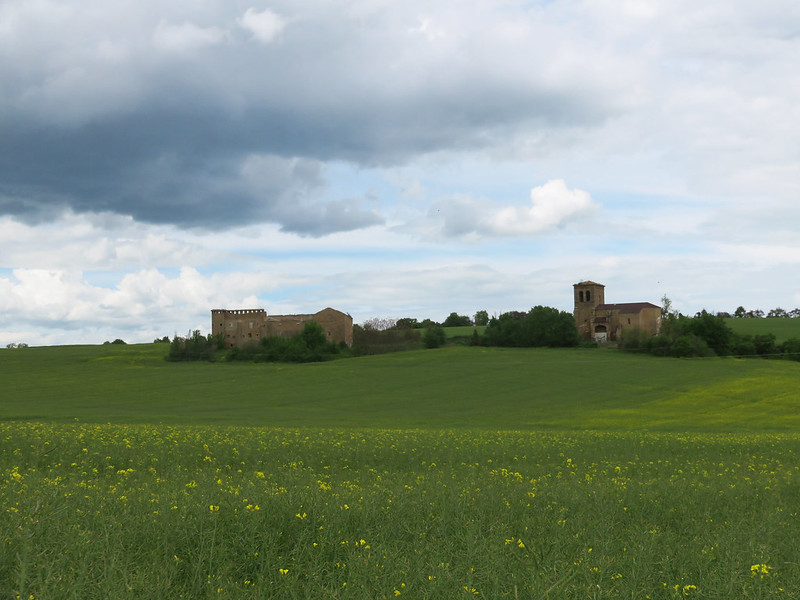 A melancholy feeling manifested in my heart as I noticed things like a stone ledge where Andrew and I rested in 2013. 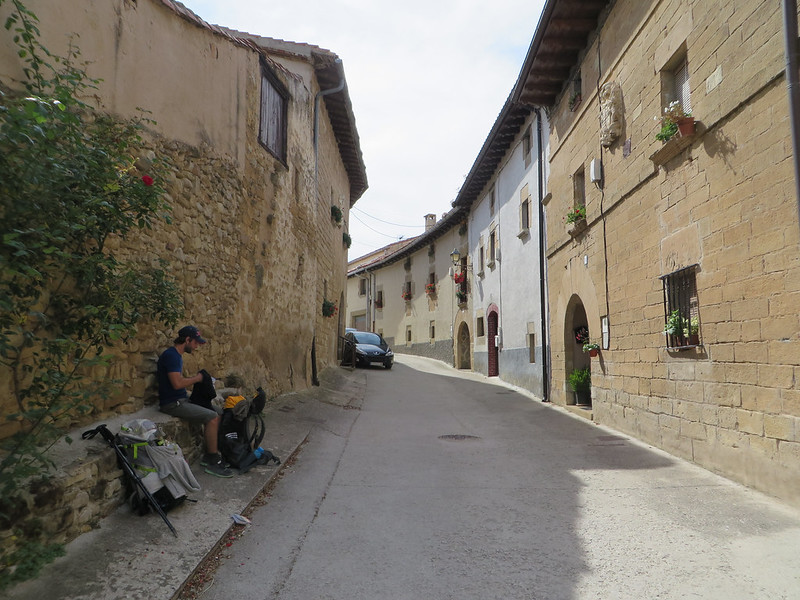 We were so hungry and hot while we walked under the blazing late-September sun that we conjured up images of finding an ice cream stand, raiding a vegetable garden and jumping into a cold swimming pool. We found some ice cream and enjoyed it here at this spot.

While sipping a café con leche across from the stone ledge, I sent Andrew a message…

I am on the Camino, but don’t want to finish walking it. I walked a few days on the Norte route, but the Camino spirit isn’t there. I came to Pamplona today and walked to the little town we had a rest at before the pilgrims monument. We sat on the ledge in the picture.

Hope you are well. 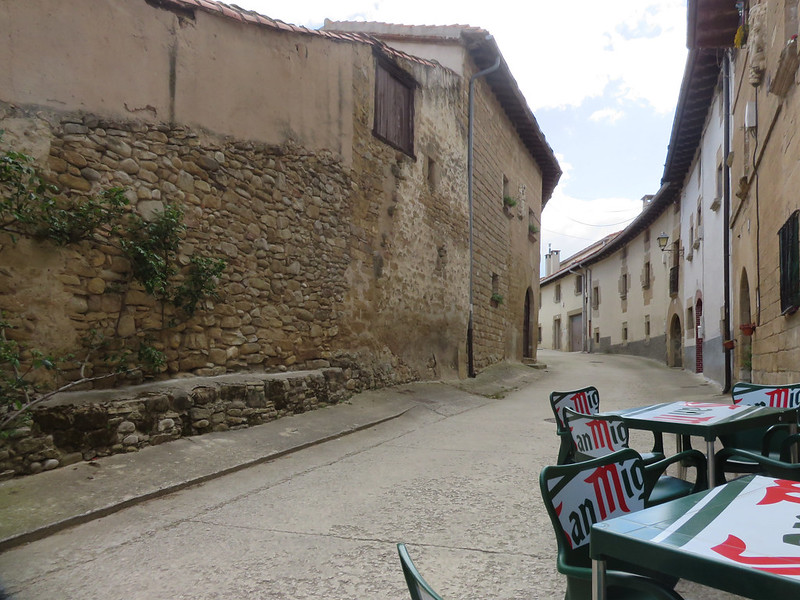 My heart didn’t want to listen to the logic that I originally tried to instill in it months ago when I planned this journey –  you can never relive the same experience twice. It was the reason I originally chose to walk the Norte instead of the Frances. 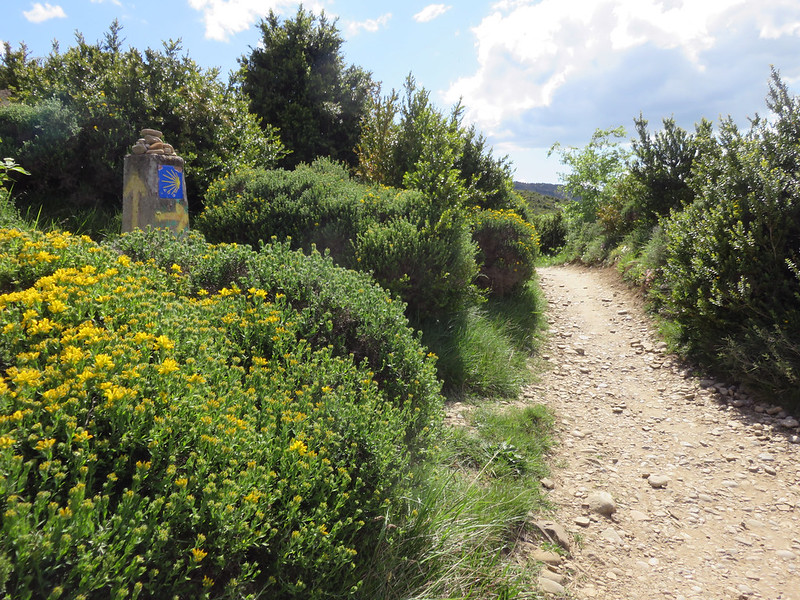 This time there was nobody teaching me German as I observed the windmühlen (windmills) up ahead. 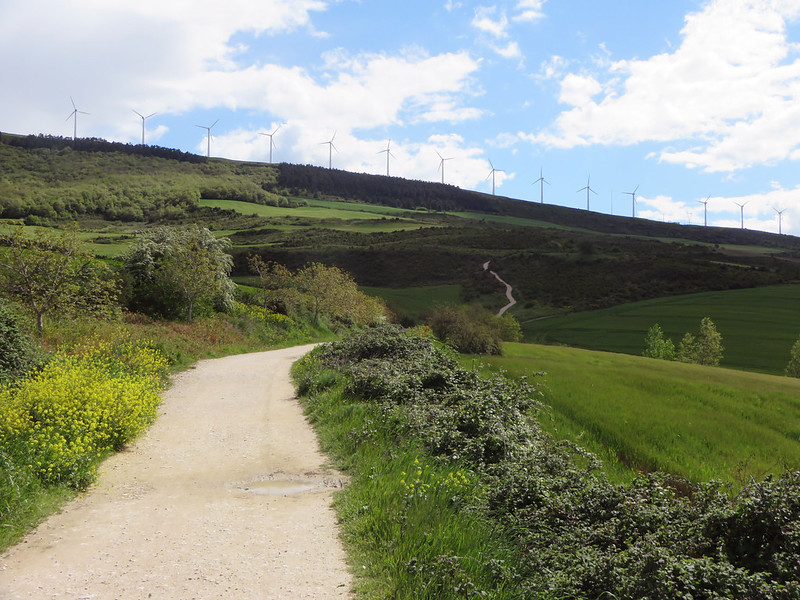 I didn’t feel encouraged by this scene of pilgrims making the journey to Santiago. 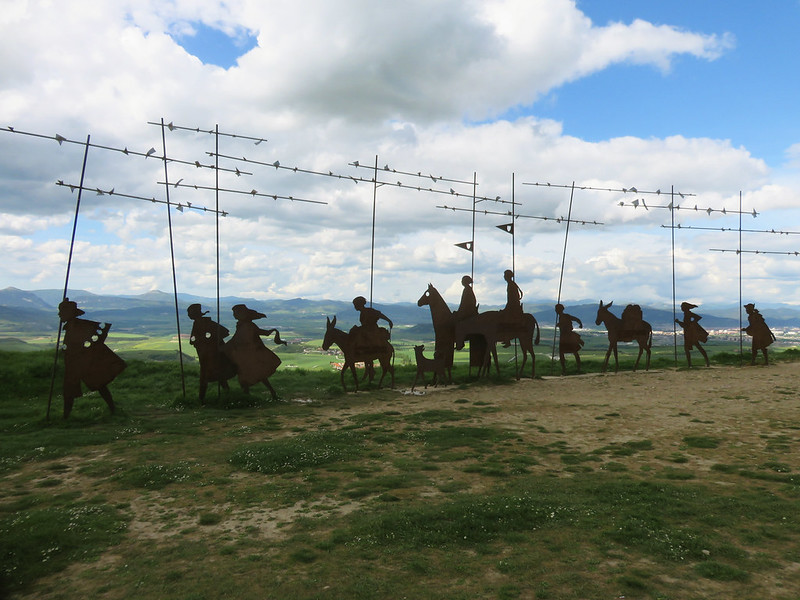 The wind whipped my loose bangs around. It was cool up top. The sun shone intermittently between the swiftly-moving clouds. The scene that stretched into the distance below was stunning. 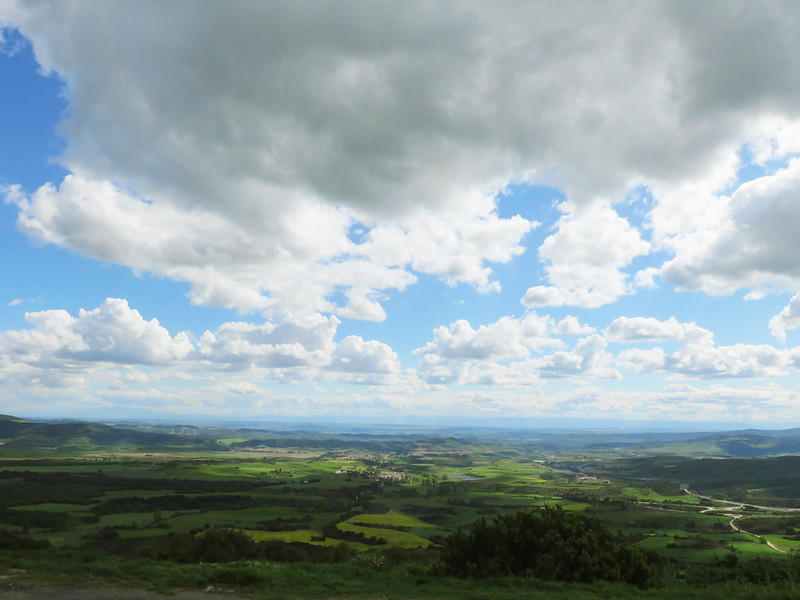 Moments of awe at the landscape distracted me from my clouded thoughts. 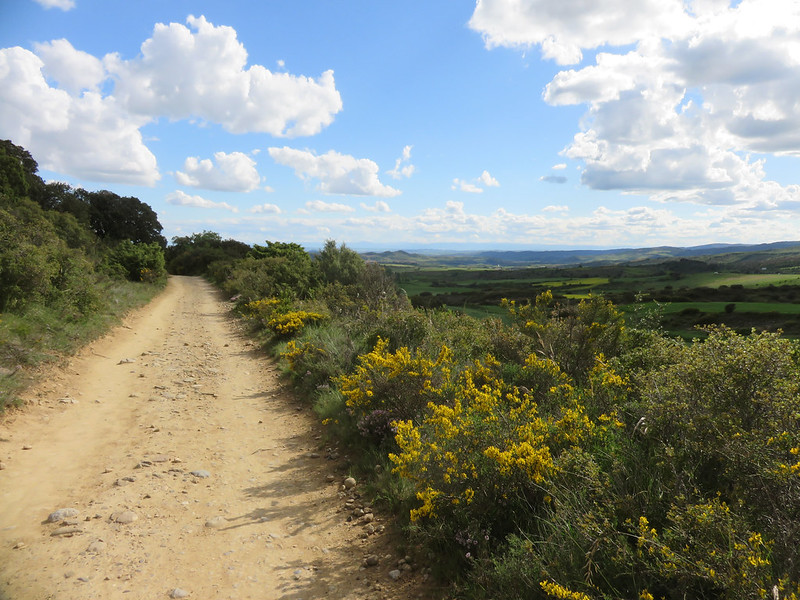 At times I wanted to pinch myself at the sight of the bright yellow mustard fields contrasting against the blue and white sky. 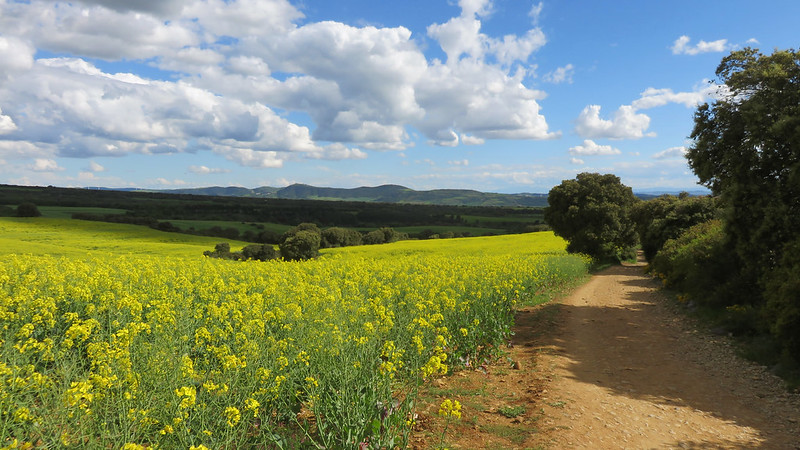 Uterga, one of my favourite quiet towns along the Camino Frances, sat nestled in amongst it. This is where I would spend the night, in the same town and in the same albergue as I had in 2013. 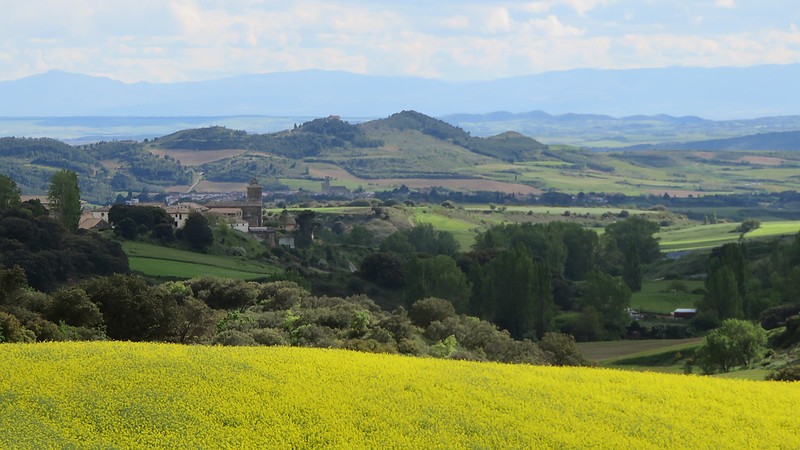 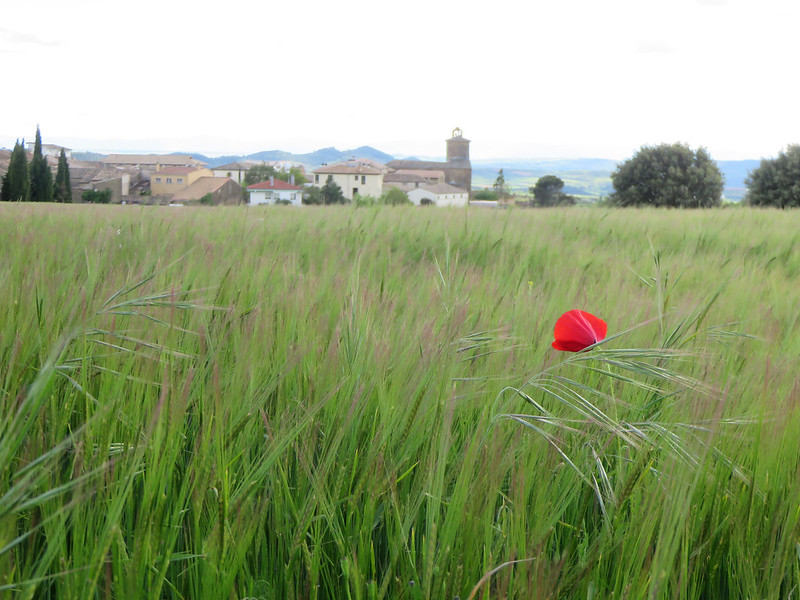 I wasn’t in the frame of mind to take photographs when I got to the albergue. Again, images of my first journey appeared to my mind like of walking the evening streets with glasses of vino tinto telling stories. Even the memories of sitting up in the middle of the night because of the snoring and mugginess in the dorm tugged at my heart.

These were my thoughts the following day…

I miss the old journey and yesterday considered stopping and bussing to Santiago, so I could retrieve my suitcase and carry on somewhere else…Germany? Italy? I’m not sure. I feel like I’m in limbo.

I can’t recapture the old journey. I know that. That’s why I originally decided to walk the Camino del Norte, but now that I am on the Frances, I just can’t help but remember the old journey as I pass certain places. It was so special, but mostly because of the people like my Camino buddy.

Last night, though, I met a lovely Danish couple in the albergue restaurant. When I entered they invited me to sit down with them and share some vino tinto. Ahhh, the Camino spirit! In our conversation they said they had given up their own restaurant in Denmark and now, jobless, embarked on this journey to figure out what they want to do next. It’s a journey of transition for them.

It’s interesting to me. Most who I spoke with along the way during my last journey were walking to figure out the next steps to take. I guess I will too for now.

The Camino Frances in spring. Wow! 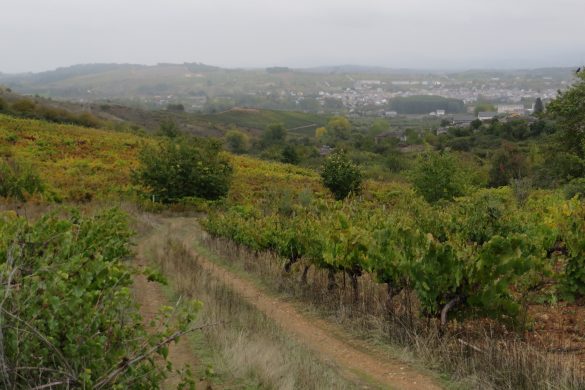 How did Andrew respond to your message? Your visit with him later on was relatively short. Were you seeing / remembering him with rose coloured glasses on too?

Hi Linda! Thanks for your questions. They are good ones! To answer your first question, Andrew’s response was very supportive. He encouraged me to keep walking, that it could be very special and that adventure would likely await. For the second part of your question, in a way, yes I was romanticizing my memories of him and when we met again it was obvious that we had both changed. They say “people come into your life for a reason, season or a lifetime. When you know which it is you’ll know exactly what to do.” Andrew and I met for a reason at that specific point in our lives. He helped me to let go of a past relationship and to move forward. It was wonderful to see him again, but as you mentioned our visit was short. It was enough though. Just like I saw this Camino more objectively without rosey glasses, I also saw Andrew more objectively and I was able to let go of my attachment to both. The entire journey and my visit with Andrew were very valuable in this way. And the special memories I was so afraid of “painting over top of” still exist 🙂