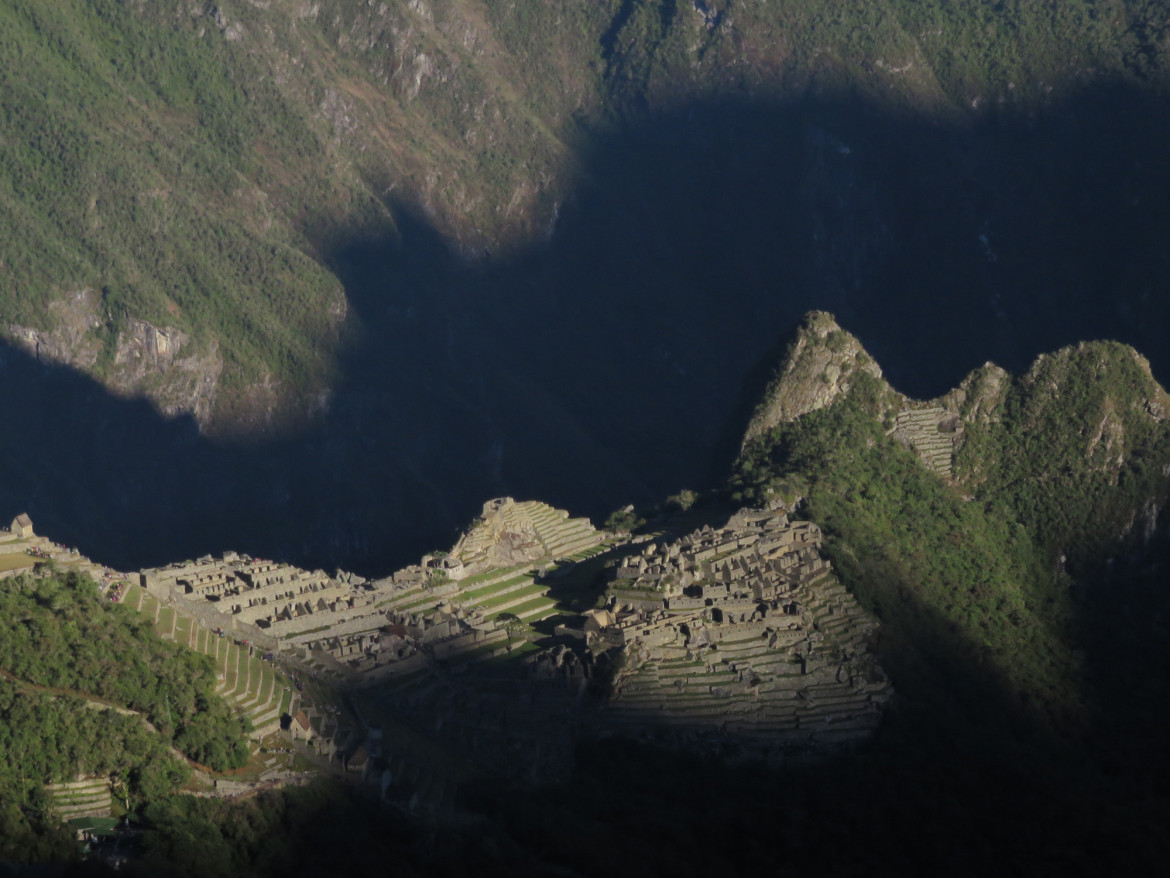 As I stood at the sun gate in awe looking down on Machu Picchu, bathed in the warm glow of the dawning sun, my thoughts drifted to how exciting it would have been to stumble across this wondrous ruin for the first time since it’s abandonment in the early 1500’s.

Incredibly stoked and curious is how I imagine American explorer, Hiram Bingham must have felt in 1911 when he discovered this place, except on that day this scene would have been concealed by the subtropical Andean jungle of bamboo thickets and jungle trees that, thanks to my friend Paul, I will always think of as gorilla trees with their thick, mossy branches that resemble primate arms. 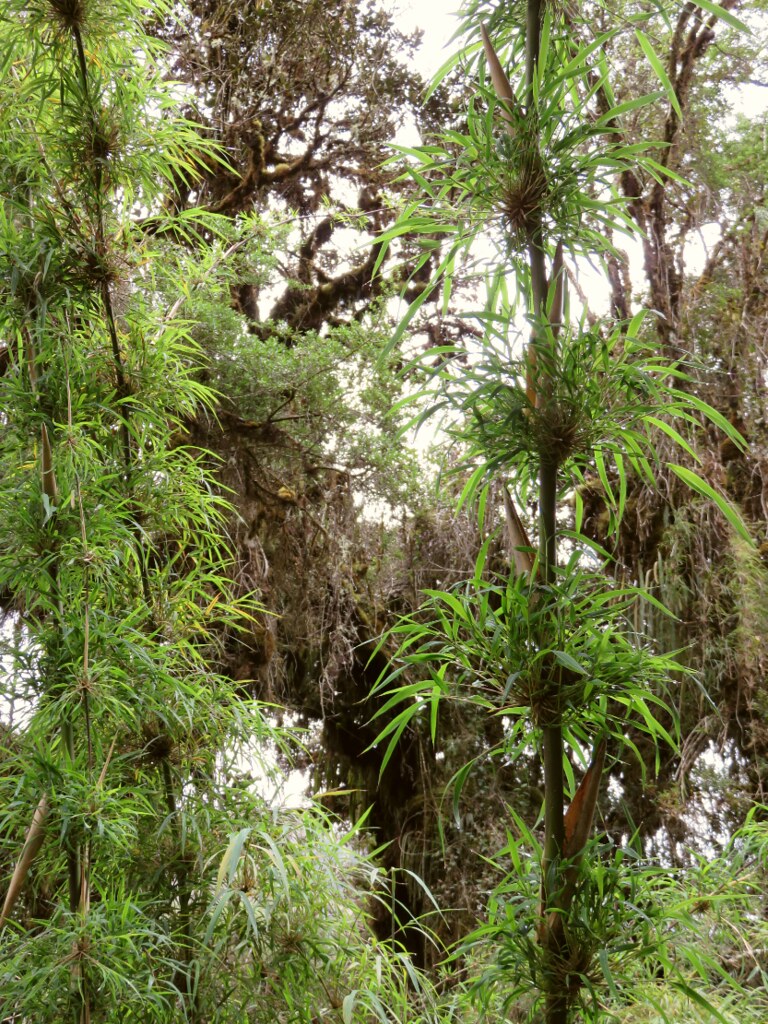 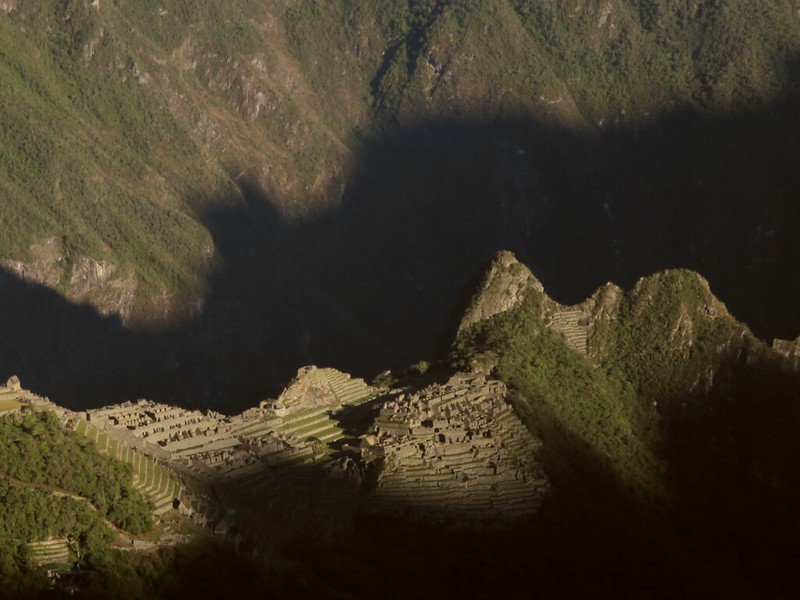 Back then I wonder what Machu Picchu would have looked like from this viewpoint, whether or not the sun penetrated the foliage to reveal hints of the grey granite structure and sacred temples underneath or if the peaked roofs poked up through the leafy canopy. I also wonder what it would it have been like to wander the maze of stone-walled passages under moss covered, gnarled tree branches that clutched tangled vines. Did jungle creatures make this place their home like the llamas grazing on top of the lush terraces and plaza below? 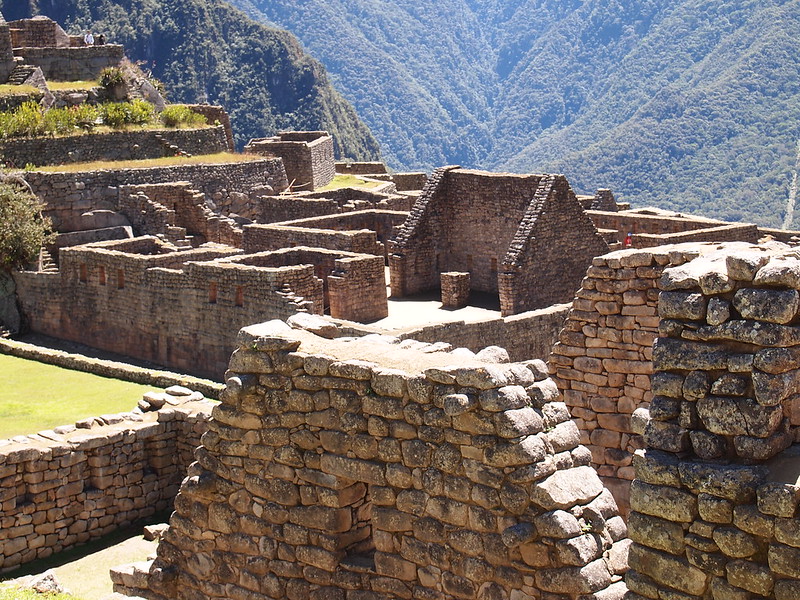 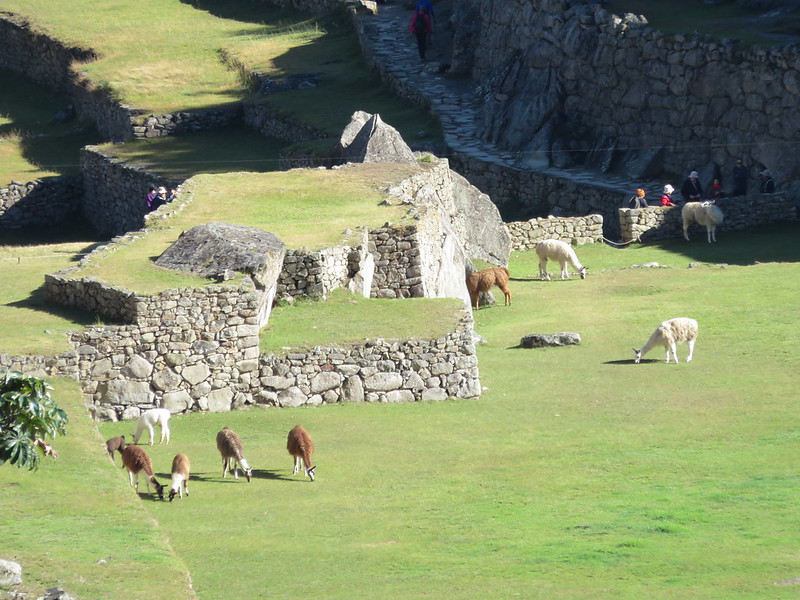 One thing for sure is that Machu Picchu was not a secret to all before Bingham came along. During Bingham’s quest to discover the lost city of Vilacabamba, he was told by a farmer about the existence of a ruin on top of the ‘old peak’, or ‘machu pikchu’ in the native Quechuan language. Bingham was eventually led to this site by a boy. Certain he had discovered Vilacabamba, what we now call Machu Picchu was mistakenly labeled The Lost City of the Incas. Vilacabamba wasn’t actually discovered until the 1960’s. Regardless, the label stuck and Bingham shone a bright light on Machu Picchu, which due to its mystery, has become one of the Seven Wonders of the World. 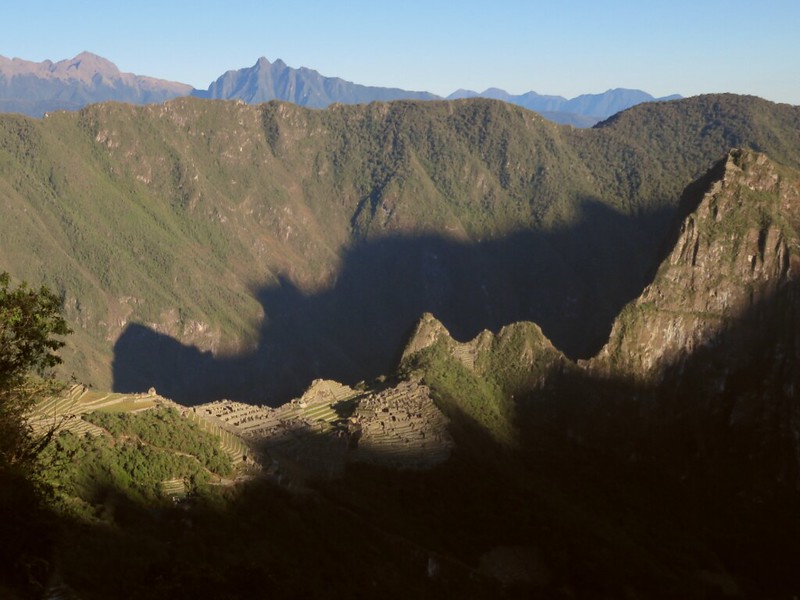 Lucky for all of us, Machu Picchu was still intact when it was discovered. This was a rare occurrence considering the Spanish destroyed any Incan ruins that crossed their path during the conquest. Ruins are still being discovered under the roads of Cusco today. As I walked past the Plaza de Armas recently, I stopped to observe an excavation in progress. The dirt-covered stone walls of buried ruins were being uncovered from underneath a road during some piping repair work. 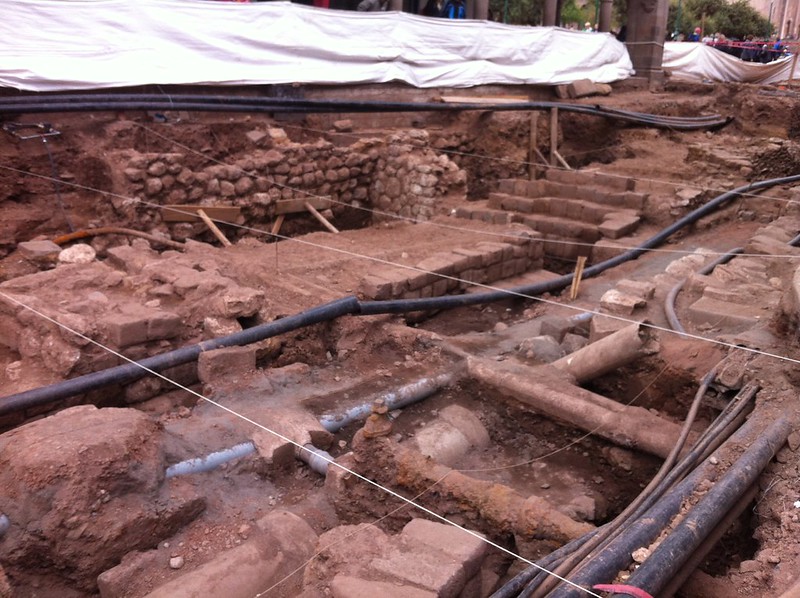 So why did the Spanish leave Machu Picchu alone? The reason is they knew nothing about its existence. None of the Spanish historical writings mention anything about Machu Picchu. Juan said the Incas hid the trail leading to the sacred city. Eventually the fast growing rainforest jungle would have engulfed the trail and mud slides, common to the region during the wet season, would have blocked it. But why was it so important to the Incas that Machu Picchu not be found? Possibly because of its sacred nature as a place of worship to Inti, the sun god and the Apu’s, the mountain gods? 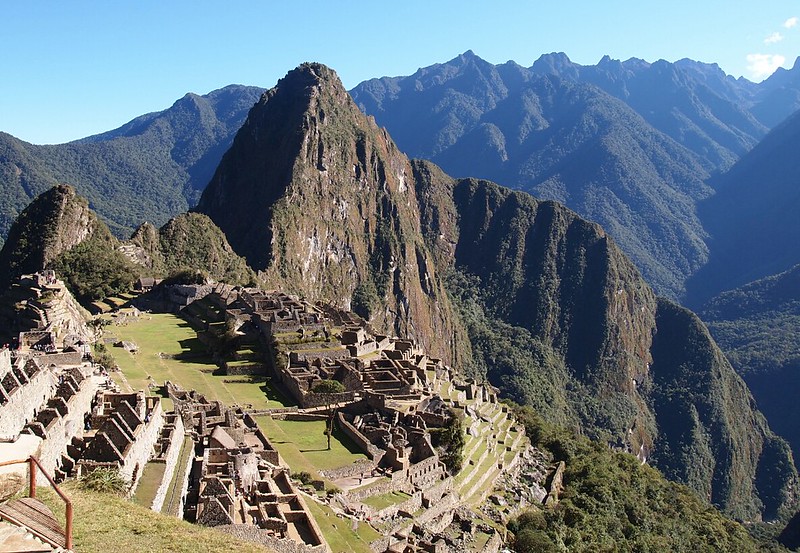 Machu Picchu’s full purpose is a bit of a mystery and one that may be locked away forever since the Inca’s didn’t keep track of their history through writings. One thought is that it was a place to house the virgins of the sun since numerous female mummified remains were found, however male mummies were also discovered. Other thoughts include that it may have been a mountain retreat for the Incan emperor or a place of education.

One purpose does seem to be certain, that it was built with the sun, moon, stars and other astronomical factors in mind possibly to keep track of important religious dates and for harvesting the land. For example, the spring and fall equinox are observed via the Intiwatana stone. 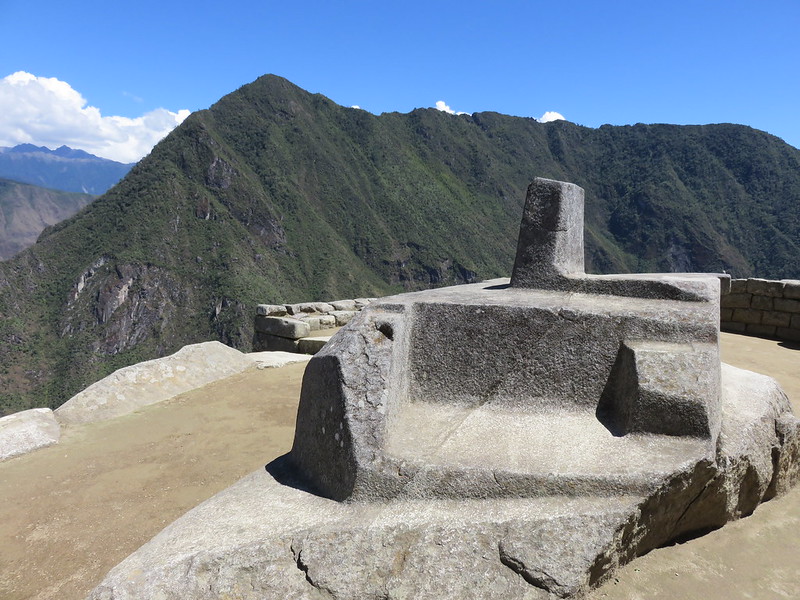 The stone was placed in a position that marks the exact day and time of the two equinoxes. At exactly noon on those days the stone does not cast a shadow. Also, a semi-circular stone building called the Temple of the Sun marks the winter solstice. 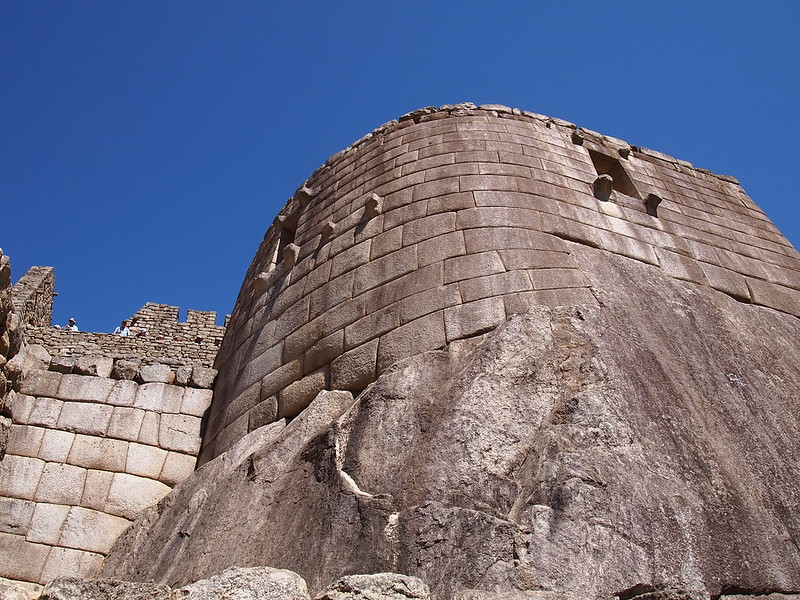 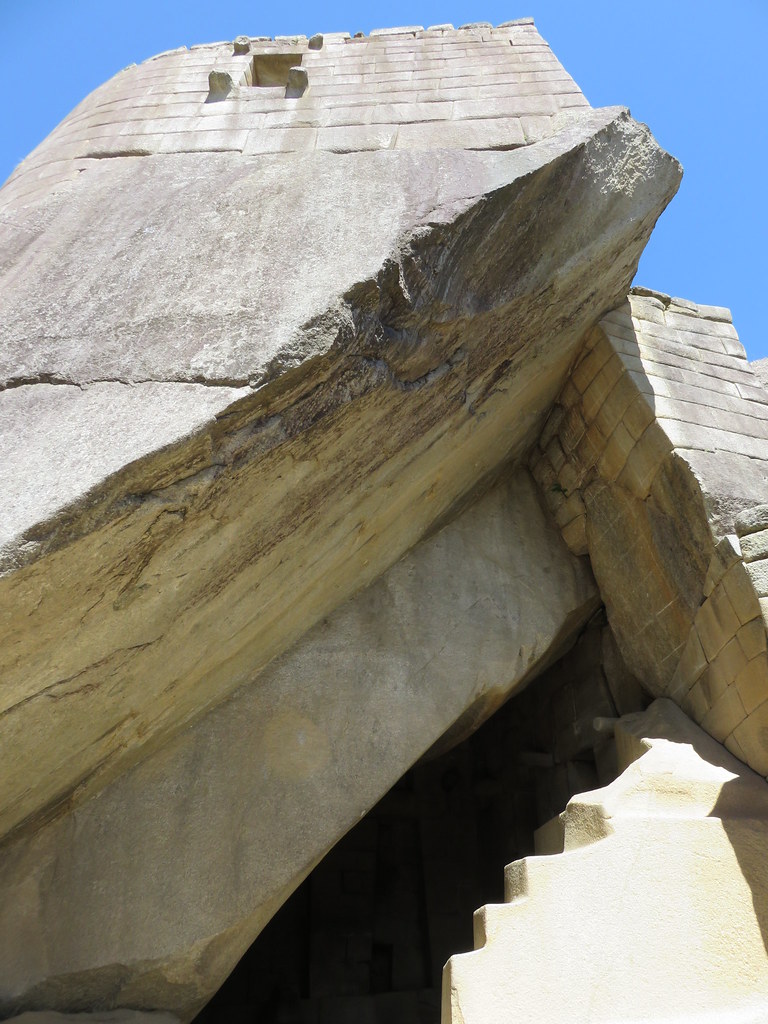 On that day the sun shines through the central window onto a sacred stone where sacrifices to the gods were made. An astronomical observatory on the top of the neighbouring mountain to Machu Picchu, called Huayna Picchu, also exists.

The group of us sat on a grassy terrace on what would have been the agricultural section of the city. 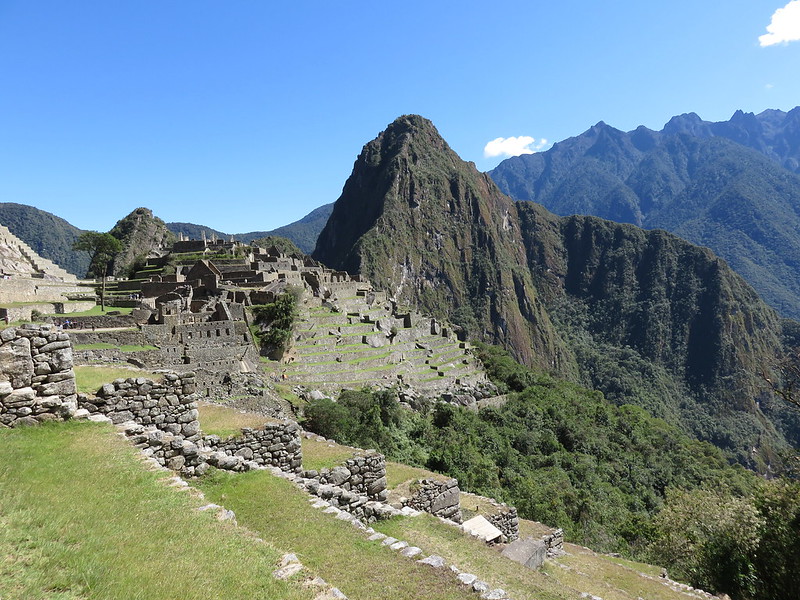 Juan showed us the division, marked by a stone staircase, between the urban area of the city and the agricultural area. The agricultural half was used for cultivation of the land. Even though high altitude would normally pose a problem for crops, it didn’t here. Crops thrived in the moist climate conditions and the terraces would have provided protection from heavy rainfall erosion. Juan also pointed out another interesting purpose for the terraces. The stone walls, which face the direction of the sun, heat up throughout the day. He had us lay a hand on the stones and, yes, they were warm. The heat in the stones would have insulated the earth from the cold night air and kept the conditions optimal for plant growth. 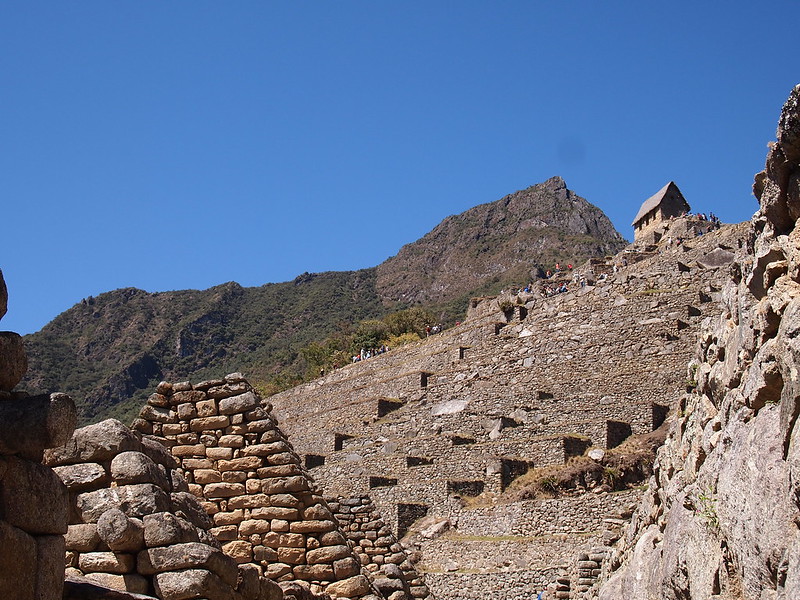 The urban half of the ancient city contained housing, temples and a plaza area. 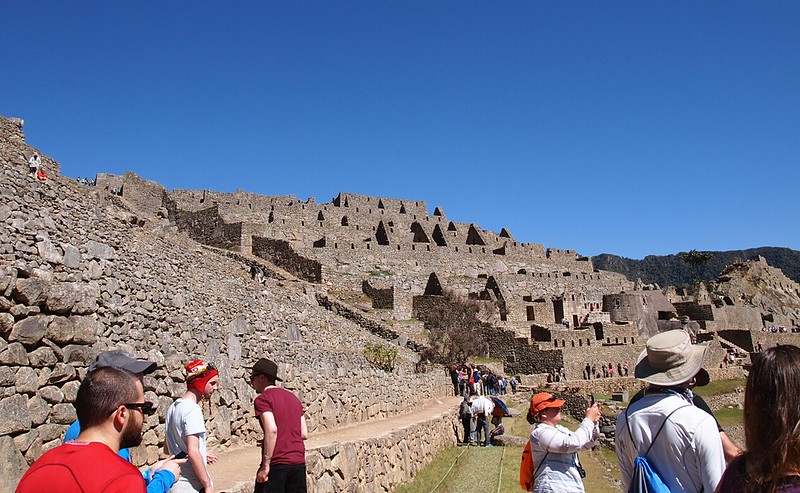 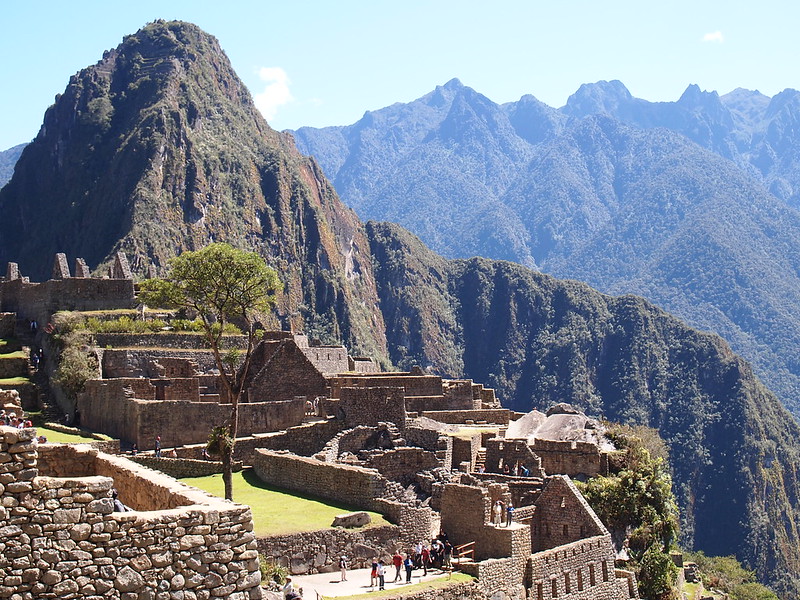 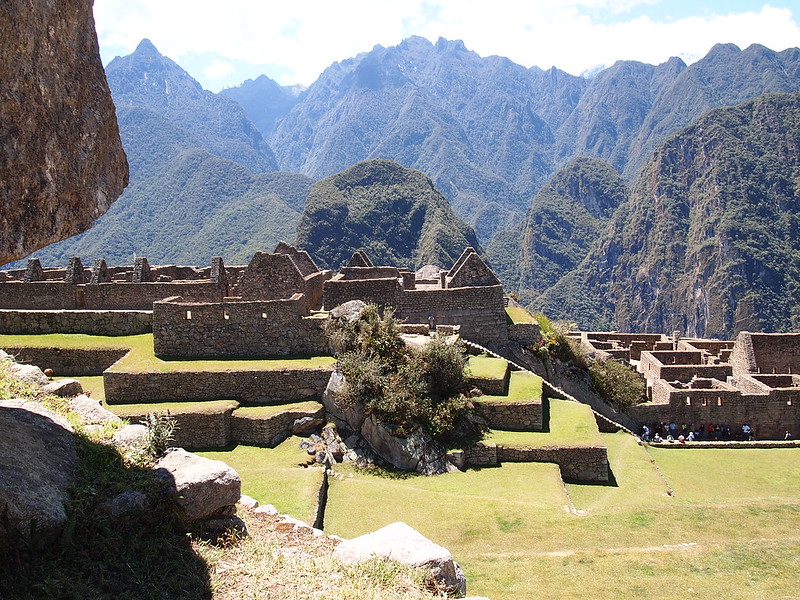 Machu Picchu was actually not very old when it was abandoned and therefore it was not entirely complete. Juan pointed out some unfinished cuts in the walls and the rock quarry from where stones were extracted. Construction began sometime in the early 1400’s before it was abandoned approximately 100 years later when the Spanish invaded the region. 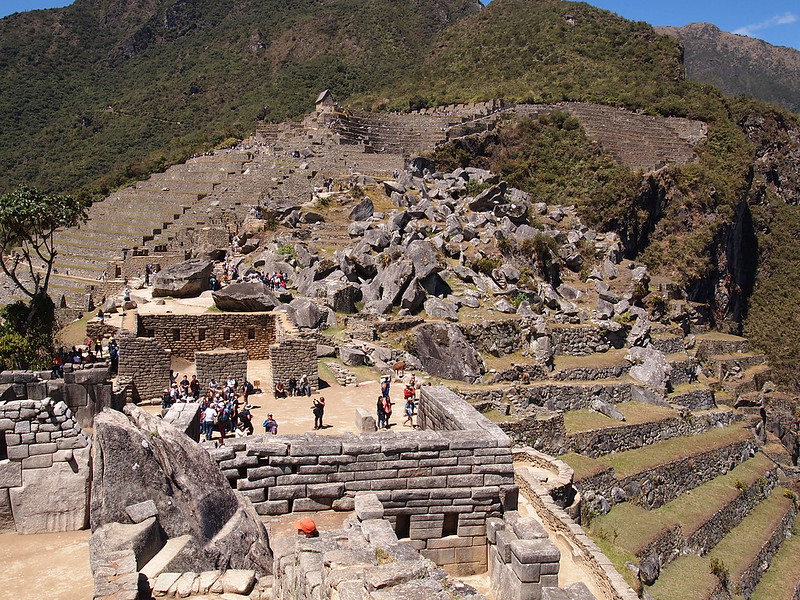 Machu Picchu is a very sacred and historical place full of ancient spirituality, mystery and wonder, but it’s the journey along the Inca Trail that made getting here so much more incredible. It feels very surreal to have trekked for four days along an ancient trail that the Incas followed for 100 years, that some believe was a pilgrimage to prepare one for entry to Machu Picchu. But that’s not the entirety of the experience. It’s the camaraderie and friendship developed along the way that made the journey so much more special. Thanks to all my Inca family members including our guides, Juan and Yaughnet, and the Alpaca Pact Team: Paul, Ryan, Pete, Walter and Bill for making my journey so memorable! 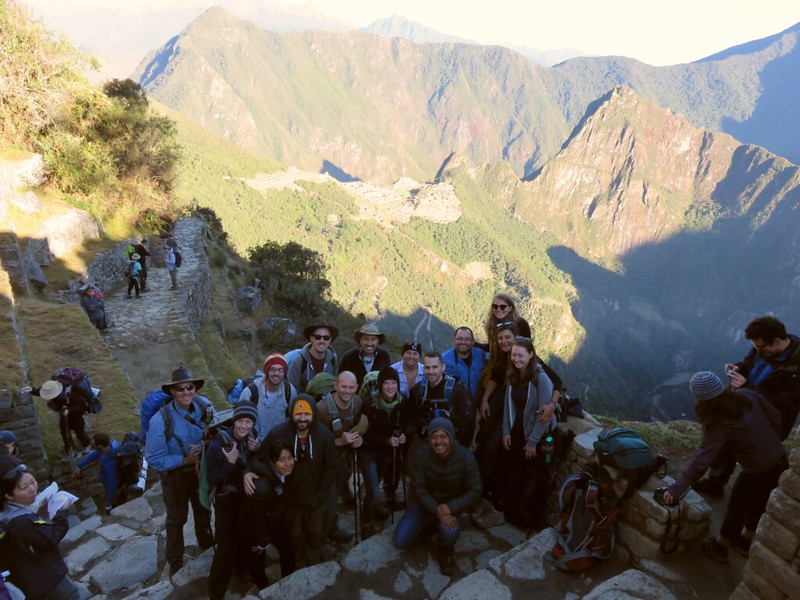 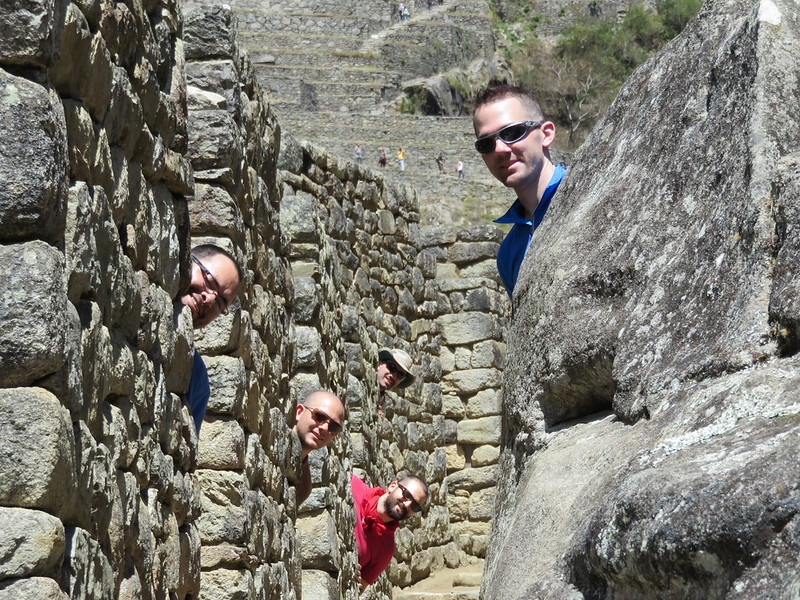 Special thanks to my Inca family pal, Paul Escalera, for letting me post several of his Machu Picchu photos and to my Healing House friend, Anya Romanoff, for submitting her excavation photo of the Cusco ruin. You’re both awesome!! 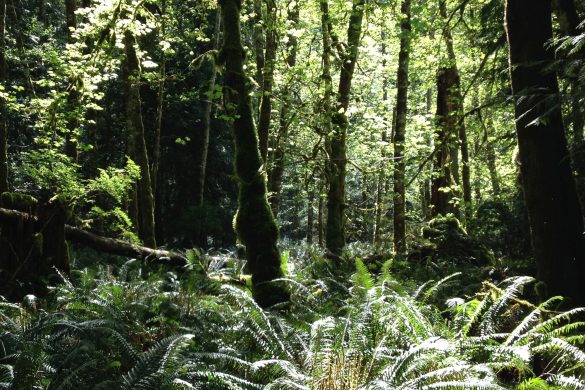 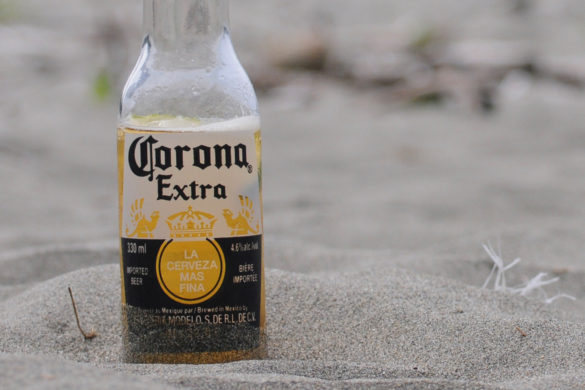 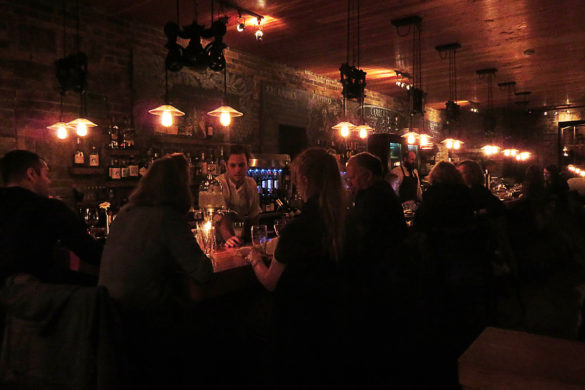 Tania, your blog is so awesome to read and a journey like no other. Thank you for taking us all along with you.
Carrie

Thanks for following Carrie! I’m happy to be able to share. It’s definitely been an adventure of a lifetime so far. More to come!